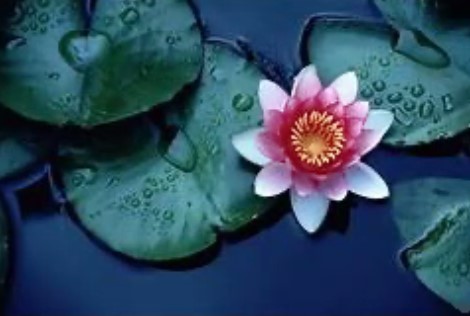 Tesshin used his talk this week to discuss a koan from the Blue cliff record –  case #21 or Chih Men’s Flower.

A monk asked Chih Men, “How is it when the lotus flower has not yet emerged from the water?”

The monk said, “What about after it has emerged from the water?”

Tesshin commented not to discount the short koans.  This one is really just two lines, but really packs a punch!  The monk is asking what is a flower before it emerges from the water, and the master responds with one answer.  What about after it emerges for all to see – and the master responds differently.  We already know never to take these answers at “face value!!”   The core question is whether there is any difference in “flowerness” before and after it emerges.  The master seems to say yes, but we need to dig a bit deeper.  Tesshin likened this case to another more familiar koan:  “What was your face before your parents were born?”

It is not enough to say that the flower is one thing before it emerges and another thing after.  However, if we give a trite answer like before and after are identical, we are also wrong!  After all only a blind man would say a leaf and flower are the same.  Lastly, we cannot resort to clever play on words either.  It is not correct to say that the empty water is “potential flower” and the bloom is “realized flower” but both are states of “flowerness.”   What we are really seeing here is the tension between relative and absolute reality.   Our challenge is to understand sameness of both states at the deepest level and then express it.

Tesshin next remarked that what this koan is asking us to do is cultivate a state of mind by taking all of reality in but not being taken in by any of it.  Yes, you can simply observe the water, then flower, and then the leaves.  There is a natural change in nature.  This is the nature of impermanence and co-origination.  Things change and interrelate.  What is the Lotus without the observer to realize it?  What does the physical manifestation of the flower really mean?  Tesshin remarked that we have molecules in our body which were once comprised Mother Theresa and Hitler.  They, the Lotus, us, and the ten thousand things embody everything.  There is nothing to judge, nothing to label, it is just “IT.”

So how do we express the lesson of Chih Men’s flower?  Tesshin talked about the US election occurring this upcoming week.  The question to ask is what does this election mean?  Will it have an effect on us?  Elections naturally put us in the mindset of “this or that.”  It puts us into a very dualistic way of thinking.  After this election there could be a transition into another state of being – but perhaps not.  What was the country before – what will it be after?  Chih Men tells us that this is really a trick question!!  Is it one thing and then something else – no!   Any answer you give to this is dualistic and wrong.  It is asking you to take a side – to split up the world.   – There is nothing to split when you really get down to it.

Tesshin admitted that this sounds very abstract.  He reminded us that touching the absolute does not mean we do not need to act in the relative world.  If that was the case, there would be no reason to get out of bed!  So, can an election change reality?  In the absolute sense no.  The atoms will still spin and the planets will still orbit.  Does this mean we should vote our conscious?  YES.  True understanding does not excuse us from right action – it means we need not to be taken in by it.  It must not hijack us.  Tesshin remarked that if more people adopted this perspective, things would be much calmer in the country than they currently are.