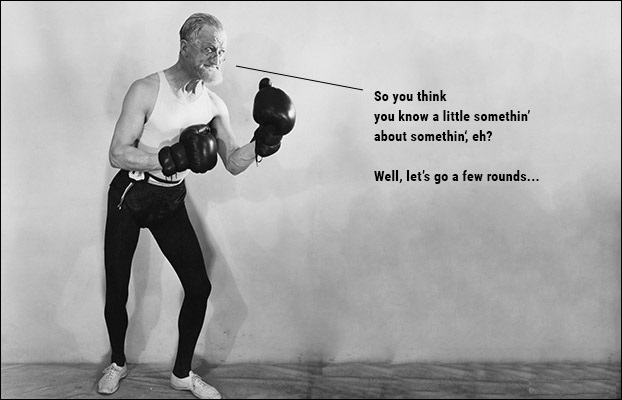 Last week Tesshin discussed the terms of this koan including the “seals” and the authority held by teachers.  This week he delved deeper into the meaning of the koan itself.  The case opens with the first master, Feng Hsueh, making a pronouncement on the Dharma.  Lu Pi, another Zen master, then responds and states, “I have the workings of the Iron Ox!”  Here Tesshin explained that Lu Pi is saying that all of the pomp of the rituals, costumes, and words are beside the point – they are distractions from the true Dharma.  Tesshin explained that this exchange is the beginning of a “Dharma Combat.”  We should consider combat like martial artists sparring.  The goal is not to defeat or harm the opponent, rather it is to test their “edges” and ensure proper technique.

Feng Hsush responds, “Accustomed to scouring the oceans fishing for whales, I regret to find instead a frog crawling in the muddy sand.”  Wow!  That is a cutting blow!  Is Lu Pi nothing but a frog in the mud?  Feng Hsush is not done with Lu Pi.  “Elder, why do you not speak further?”  Feng Hsush landed a metaphorical blow and is goading Lu Pi to respond.

So, what is Lu Pi to do?  Pi hesitates and thinks.  What is the most skilled way to respond?  What can Lu PI say which would be a valid response?  What can one master say to another which conveys all of Zen?  Feng Hsush turns up the heat by striking Lu Pi with his whisk.  (Again, this is a purely ceremonial move to goad Lu Pi to speak.)  Still, Lu Pi stayed silent – what could he really say?  While we wish Lu Pi had some witty rejoinder, we still must respect his deep understanding of Zen in that he did not mindfully respond with empty words.

Did anyone actually “win” this combat?  In reality nobody won as both participants were already perfect and had the true Dharma.  They walked in as winners and left as winners!  One of the commentaries of this koan asks who is the guest and who is the host?  In other words, who is the more accomplished?  Of course, the answer is that neither of them are more accomplished.  Tesshin reminded us that it is the same with all of us.  We are already perfect – we just need to clear away our delusions and realize it!

So, what did this koan accomplish?  Its purpose was to set up a series of dualities for us to see past.  Do you “seal” or not?  Do we practice or not?  Who is the master and who is the student?  At the end of the case, Feng Hsush descends from his seat.  In other words, it does not make a difference who is labeled teacher and who is labeled student.  These are simply labels we insist on using to breakup suchness of reality into tiny pieces.  Tesshin reminded us that if we do not realize that we are our own teachers he is not doing his job properly.