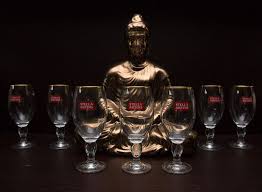 What about the Buddhist precepts?  Why did these develop and what purpose do they serve?  Are they simply an Eastern version of the Ten Commandments?  Well, to some extent, yes.  The precepts do describe actions which will lead to a harmonious society.  However, Tesshin thought there was something additional we should consider.  It has always been taught that the precepts are a practical method which allow Buddhists to eliminate suffering.  Tesshin next enumerated the five percepts normally taken by individuals not following the monastic path…

(Monks have a few additional percepts specific to their path)

I will be mindful and reverential with all life,

I will not be mindlessly violent nor will I kill.

I will respect the property of others,

I will not steal.

I will be conscious and loving in my relationships,

I will not give way to lust.

I will honor honesty and truth,

I will not deceive.

I will exercise proper care of my body and mind,

I will not be gluttonous nor abuse intoxicants.

Tesshin noted that one major difference between the Ten Commands and the Buddhist percepts is that the percepts always start with a positive statement.  It is not enough to state that one should not kill.  The first percept starts by declaring that we must revere life.  If you believe that is necessary, then it naturally follows that killing is wrong.

Tesshin next wanted to focus our attention on the fifth percept.  Tesshin asked why would Buddhism want to place such an emphasis on a pure mind and body.  This should be clear to us working on the path.  Everything we do is about realizing reality as it really is and to dispel delusion.  As such, it should come as no surprise that intoxication is unskillful as it hinders our ability to see the world as it really is.

However, Tesshin noted that definition of intoxicants is not as simple as drugs and alcohol.  As Thich Nhat Hanh has noted many times, it can also include “toxic” food, conversations, and entertainments.  Stated simply, intoxicants include anything which “messes you up.”  Tesshin then stopped and mentioned that even a fetishism like “Teetotalism” could be an intoxicant if it is primarily driven by an egoistic desire to be better than everyone else or to wield power over others.

Here Tesshin was clear, as with all the precepts, it is always about the deeper desire to have a clear mind free of suffering.  The precepts are not about legalism.  You are not an addict if you have one glass of wine.  You are deluded, however, if you think about that glass of wine all day!  Also, if you eschew that can of beer, but spend all day thinking about how superior you are for skipping the beer, then you are no less addicted to intoxicants as the drunk passed out on the street.

However, again, the intoxicants Buddhism is warning about is not just ones consumed by the body.  Buddhism has always been more worried about the intoxicants of the mind.  We need only to look at the past year to see how many Americans became totally intoxicated with “current events.”  Cities were violently occupied and the country’s capitol was attacked.  If that was not bad enough, one could walk through any small town or visit any family gathering and see people screaming at each other over abstractions.  Is this not intoxication in the worst possible sense?  It is the intoxicant of “I am right and you are wrong.”  Tesshin asked, when you look at the protesters on either side, did you see any happy faces?  There is truth in the term “news-junkie!”  A junkie by any other name is still a junkie.  Perhaps these people should consider the fifth percept!

Tesshin next asked, why do people do things which harm themselves?  A psychiatrist friend of Tessin said that people think they are getting a benefit.  So, we take a short-term benefit which comes at a terrible long-term cost!  Tesshin described that he once noticed his children gossiping with their friends.  Gossip may create short term bonding with others, but in the long term it creates suffering and could degenerate into bullying.  In the long term, there can be no true happiness down that road.  Perhaps a better path is to remind the children that everyone desires to be happy and free of suffering.

Tesshin wrapped up by reminding everyone to think on their “new years homework assignment.”  Specifically, for the new year, what three things are you going to keep doing, start new, and stop doing?