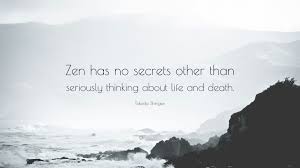 Tesshin used his talk this week to review the blue cliff record #55.  Daowu’s ‘I Won’t Say’

One day Daowu, accompanied by his disciple Jianyuan went to visit a family in which a funeral was to take place, in order to express sympathy.

Jianyuan touched the coffin and said, “Tell me, please, is this life or is this death?”

Jianyuan said, “Why don’t you tell me?”

On their way home, Jianyuan said, “Master, please say it to me right away. If you don’t, I shall hit you.”

Daowu said, “Strike me if you like, but I will never say.”

Some time later Daowu passed away. Jianyuan came to Shishuang and told him the whole story.

Jianyuan siad, “Why don’t you tell me?”

One day Jianyuan, carrying a hoe, went up and down the lecture hall as if he were searching for something.

Shishuang said, “What are you doing?”

Jianyuan said, “I am seeking the sacred bones of the late master.”

Shishuang said, “Giant billows far and wide; whitecaps swelling up to heaven. What sort of sacred bones of your late master are you searching for?”

Jianyuan said, “That was very good for me in order to gain power.”

Taiyuan Fu said, “The sacred bones of the late master are still there.”

Tesshin next started his discussion of the Koan.  It seems strange that someone attending a funeral would start striking the coffin.  Jianyuan is demanding his teacher explain life and death to him.  The teacher will not say.  In some interpretations, the teacher claims that he “cannot” say as opposed to “will not” say.  Jianyuan gets frustrated – “You must know – tell me or I will strike you!”  Needless to say, Jianyuan is getting kind of desperate for an answer.  Here Tesshin stopped to make some comments.  First, there is no real shortcut to realizing reality.  There are no “magic words” that master Daowu could say which would give Jianyuan what he is looking for.  Secondly, the Zen tradition is full of stories of teachers striking students to knock them out of their complacency.  However, for a student to strike a master is a major breach of decorum.

Needless to say, after this incident, Jianyuan left his teacher and became an iterant monk.  In time Jianyuan found a new teacher and his original teacher passed away.  The death of Daowu raised this burning question again in Jianyuan’s mind.  “Alive or Dead?”  Jianyuan asks his new master and he gets the exact same response.  However, this time Jianyuan is not frustrated – he has instant Kensho!  Why the difference in outcome from the same response?  It is important to understand that the two events in this Koan happened 35 years apart.  Tesshin remarked that where we are in life has a big impact on how the Dharma affects us.  For instance, when Tesshin ordained as a monk at the age of 20 the vow of poverty was not a big deal for him – he was already fully broke in a foreign land!  However, when he later started the temple, he had much more experience in life.  The vows meant something totally different to him.  Tesshin then asked everyone to consider their own path.  Many people read about Buddhism while in college.  Do you remember your initial readings on the tradition back then versus how you read them now?  As you live, your perceptions change.  This is Jianyuan.  The teaching was always consistent – it was the student which changed.  This is the point of practice.  We work and work until that point when we are ready to penetrate the teachings.

Tesshin next moved on to what the Koan is trying to teach.  “Alive or Dead – I cannot say”  The student sees death up close and asks the master to explain it.  The problem is that life is death and death is life.  It is all one thing.  If Daowu starts to put words to it, he is just flapping his lips!  He is actually doing his student a great disservice!  At this point, Tesshin apologized for doing that thing which Daowu refused to do – namely putting words to the larger reality which cannot be explained with words.  The direct answer is and can only ever be Mu.  There is nothing else to say.

It may appear cruel to not to give Jianyuan a better answer than this.  He is trying to deal with the big issue of death but he cannot penetrate it.  His teacher is silent on the matter!  But this is how it must be.  One can only deal with life and death by one’s own effort.  This is why we practice.  It is said in Zen that the great issue is life and death.  Time swiftly passes by and opportunity is lost.  This is why we sit right now – to work out this issue in our own body-mind.   Yes, the master could have told Jianyuan a “nice story” to feel better, but this would have corrupted his study of suchness.  If you are looking for nice stories, the Zen monastery is not the door to knock on – go see a movie!

As the Koan concludes, we see Jianyuan entering the teaching hall with a hoe to rake funerary ashes looking for relics of his late master.  He is asked – what relics are you looking for?  Jianyuan states that this raking is where he should apply his effort.  Tesshin noted that the holding of relics (bones sifted from cremated bodies) is a common tradition in Asia.  However, Tesshin noted that Jianyuan is not actually looking for bones.  This really means that now that the student has Kensho he realizes that his teacher’s “spiritual remains” pervade the entire universe – they remain intact and they still exist.  Do you see it?  Do you see it?  What is the meaning of life and death?

Lastly, there are many verses attached to this case.  This one was very apropos…

In arriving, not an atom is added —

thus life is called the unborn.

In departing, not a particle is lost,

thus death is called the unextinguished.