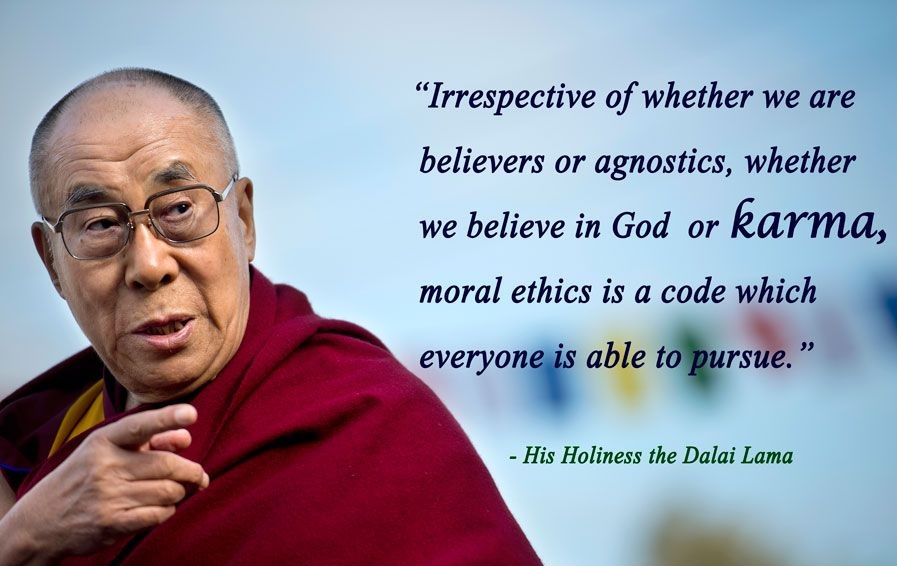 Tesshin continued the discussion of the paramitas this week.  He likened the paramitas to baking a cake, as all the ingredients need to work together to get a good outcome.  Stated differently, no paramita is more important than the others.  This week, Tesshin introduced paramita “ingredient” of Sila, which commonly translates as ethics and morality.

For this talk, Tesshin planned to explore the differences between a system of ethics and a code of morality.  He also wanted to compare and contrast how they work in Abrahamic and Buddhist traditions.

Tesshin started with the concept of ethics.  Stated simply, ethics provide a system of beliefs which can help us guide our behaviors.  It is all about concepts and principles.  Ethics also answers the question of why we would choose one behavior over another.  For instance, in Buddhism our main goal is to alleviate suffering in all sentient beings by understanding the true nature of reality.  Our code of ethics then asks us to align all of our actions keeping this ultimate goal in mind.  A system of ethics is not clear and crisp.  It does not actually prescribe a list of “do’s and do not’s.”  The western religious traditions also have a code of ethics which is commonly described as love in a personal god and behaving in a way that God has stated to be optimal.  Again, here the ethics do not tell someone what to do, rather it describes the background set of beliefs which drive us to specific behaviors.  Again, Tesshin likes to call this our “operating system.”

Ethics tend to be problematic when we demand a YES/NO answer quickly.  This is where morality enters, as it is a set of specific rules of behavior.  So, for instance, almost all traditions have a moral rule against killing.  In the Abrahamic traditions, we see in the 10 commandments, “Thou shall not kill!”  In the Buddhist precepts, we have “Affirm Life, do not be violent.”

Here Tesshin was clear, Sila is a subtle mix of morality and ethics. Buddhism has a long tradition of an interplay of these two concepts.  This should not come as a surprise as a hard split between the two would simply be another dualism distracting us from really understanding how things work.  Tesshin next provided some examples to help us understand this mixing.  As stated above, most traditions have an injunction against killing.  The ethics behind this in Buddhism is suffering and, in the West, it is obeying God’s plan.  However, things are never so simple.  For instance, what happens when someone joins the military?  The military has a code of ethics of “justified defense.”  The question of whether it is justified to kill to defend your country or yourself is a question of ethics.  Morality cannot answer this.  Another example is the dilemma of a lawyer defending a murder suspect.  What is the nature of society’s retribution against an offender?  What is the extent of a lawyer’s responsibly to provide a vigorous defense?  If we took a purely moralistic stance, we may come to the wrong conclusion.  In activating Sila, we may start with some core absolutes of morality, but it is in ethics where the gray areas are negotiated and resolved.  This negotiation is where Sila exists.

However, Tesshin noted that we should not over emphasize ethics when thinking of Sila.  Our morality pervades our ethics!  Again, he cited the law and noted that at the base of most legal systems we find the morality of the Ten Commandments.  The Abrahamic faiths state clearly that each individual is special because they are a creation of God.  If the sanctity of the individual was not in our morality, it would never make it into our ethics or legal systems and our cultures would be quite different.  (One need only read history of ancient Rome to see what that would look like.)

Another example Tesshin provided was the debate in Buddhism over vegetarianism.  If we are to do no harm, how can you eat meat?  We can start with morality to unwind this.  Killing a sentient animal is doing harm – thus we should not do this.  Many Buddhists take this exact position.  However, is it the only answer?  Tesshin noted that his own teacher Ban Roshi was from a tradition where they did eat meat.  Roshi would say that he was not “anything” and this includes vegetarian.  The point is not to get hung up on the word as it is yet another discrimination!  Roshi still subscribed to the injunction against violence, so he would not actively select meat in his diet.  However, he also believed in the paramita of Dana and would not refuse alms in the form of meat.  If someone put meat in his begging bowl, he would eat it and give thanks.  What was the alternative, mindlessly throw it away because it violates a moral rule?  This is even worse!!  The animal suffered and no gain came of it.  All he would have had was smug satisfaction that a moral rule was obeyed.

Tesshin wrapped up by saying that the debate is where Sila operates.  There is nothing simple.  Morality are rules and ethics are the concepts.  They are two sides of the same thing – no separation!  Our practice is about understanding this and using the ingredient of Sila paramita in the larger perfection of our existence.