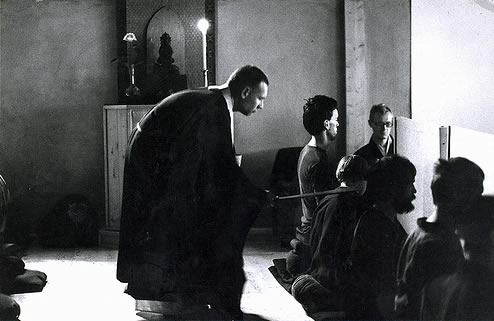 The “awakening stick”, or kyōsaku, is used at the discretion of the Ino, the one in charge of the meditation hall in the Zen Buddhist temple. It is not considered a punishment, but a compassionate means to reinvigorate and awaken the meditator who may be tired from many sessions of zazen, or under stress of the “monkey mind”. Although the uninitiated may ask “do they use it to beat us?” the answer is “No”.  Although it may look intimidating, it is actually an aid to meditation that allows one to “break through” the ego which is holding one back from deep existentialist Buddhist mediation. In this sense, the kyōsaku is one of your best friends.

It is difficult to be totally present in the here and now and leave behind our busy lives. When you get into deeper and more intense meditation you will encounter a battle with your ego which will try to prevent you from the realization of your true nature. The ego is attached to your world view or your identity, i.e., what you have constructed around you that defines who you are. If you let go of all the things you have struggled for, what happens? This is the point where the ego won’t let go of who you are. In essence, you will encounter a block. You will then need help to break through this block. That is when you will go into gassho, i.e., “palms of the hands placed together a slight distance away from your chin” and ask Abbot Paul to help you break through the barrier through the use of the kyōsaku. The kyōsaku is a tapered stick with a wide flat end which makes a sound which is actually worse than the tap itself. When you feel the light tap on your right shoulder (see top photo) from the flat part of the kyōsaku, you then drop your head to the left and bow to the administrator (in this case Abbot Paul) after being struck.

The first time you break through and encounter your true nature it is transitory. This is called Kenshō, the small enlightenment when you start to let go of the trivial things you thought had meaning and realize your true value. You are now on the path to the Satori, the ultimate enlightenment. At this point you start to appreciate the tools which deepen your practice and deepen your soul.  And you start to recognize the simple things that are your tools. You bow to your cushion. You bow to the room where you meditate. But it is critical that you recognize why you bow to things.  You bow to an image of the Buddha. Historically, Abrahamic traditions have taught that we should not worship graven images. But we are not praying to the Buddha. When we bow to a statue of Buddha we are recognizing that the statue is a tool to help us reach enlightenment. There is no Buddha. That Buddha is “Me”, my internal nature. Similarly, in Shinto shrines, the primary object is a mirror, which in some shrines is fixed at such an angle that when worshippers pray, they find they are looking at their own reflection. People are praying to themselves!  But it’s not a case of worshipping your own ego so much as worshipping the divine within yourself.

Transcribed by Debra B. Kessler from notes taken during the Dharma talk delivered by Abbot Paul on November 25, 2017 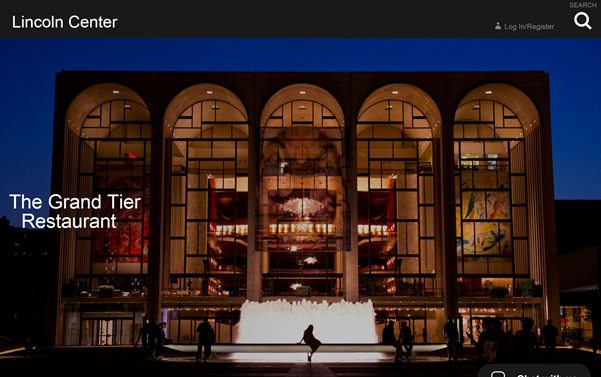 Abbot Paul was in Washington this week to meet with several leaders of industry, primarily technology, to discuss the plight of the underprivileged in America and the role of technology in alleviating their suffering. As we face the loss of approximately 10 million jobs in the US in the next few decades to the artificial intelligence revolution (aka the second machine age, mechanization, smart machines, machine learning), Abbot Paul is attempting to bring heads of competing industries together to deal with the problem of the diminishing job market by proposing a technology-based solution, similar in scope to Franklin D. Roosevelt’s New Deal during the period of the Great Depression in America.

During a roundtable discussion during this conference, one prominent individual got up and stated: “it is not the lack of opportunity that is the problem in this country but the power gap in the US as <1% of our population controls >50% of the wealth”.  Most people in the group agreed with this one individual and acknowledged his point of view but he wouldn’t let it go.

But what is the Buddhist point of view of this gap, and furthermore, what is the Buddhist reaction to such behavior on the part of this one individual? From a Buddhist’s point of view all beings have the capacity to become enlightened; however the path to enlightenment is different for everyone. Some people are strong, some are weak, some are smart, and some are not so smart. The only thing we all share in common is that we are all on the same path to alleviate suffering and delusion.
To illustrate his point Abbot Paul then told us a story:

Japanese monastic life is rather primitive in that the monks endure a lack of comforts we take for granted such as indoor plumbing and running water.  It is especially difficult in the winter months in Japan as the temples have no central heating except for small personal kerosene heaters.  During one particular winter in Japan, Teshin developed pneumonia and to recover he was advised to return to the United States. So after the Japanese New Year he returned to the US as he had received an invitation to teach at the Julliard School in NY. A Julliard employee was kind enough to offer to share her apartment with Teshin during the 3 months he taught at the school during his recuperation. Her name was Lynn. When Teshin asked her what she did at Julliard, she replied that she was a fund-raiser and had the easiest job in the world.  She explained, “I go to fancy parties and when asked what I do, I say I raise money for the Julliard school”. Inevitably, the wealthy party-goers then exclaim “Oh, can we help?”

Now a 10 million dollar contribution to the Julliard School comes with a ‘thank you’ package which includes a catered meal at the Lincoln Center for 200 guests and a private concert by the Julliard students and other performers. One particular wealthy patron had a daughter who asked her father for a 10 million dollar check so she could invite her friends to such a party and Lynn was assigned to help with the arrangements.  Now apparently there are certain rules in high society that include sending out a ‘save a date’ reminder 2 months before such an event followed by a hand-calligraphed invitation 2 weeks before such an event. Apparently the daughter was having difficulty providing a complete list of invitees to the event. The 2 month mark before the event was drawing close and as the time neared the woman was becoming frantic, asking Lynn if she had sent out the list of invitations to which Lynn replied “No, the list is still incomplete” as it was short 10 names. At exactly the 3 week mark before the event the woman became contentious with Lynn, “the doilies have to be the right color”, “the wine has to be exactly this vintage year” and as the days prior to the event grew shorter the woman became more and more agitated. Finally the day of the party arrived. The woman came early to the event to review the table settings and the wine and found that the cutlery was not correctly set on the tables and the wine vintage was a year off at which point she totally fell apart. To put it simply, the woman had a mental breakdown and had to be taken into psychiatric care.  The upshot was that the party never occurred.

And so the moral of the story is two-fold:
1) The powerful and privileged are not immune to a delusional vision of the world and thus do not escape suffering.
2) Spiritual enlightenment is where we need to put our focus and not in the frivolities of the world and the wish to fulfill such desires; true happiness can be found in our cushion, our zafu regardless of who we are or our material resources.

Transcribed by Debra B. Kessler from notes taken during the Dharma talk delivered by Abbot Paul on December 2, 2017 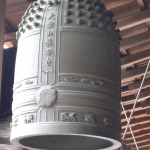 Bonshō (Japanese: 梵鐘, Buddhist bells), also known as tsurigane (釣り鐘, hanging bells) or ōgane (大鐘, great bells) are large bells found in Buddhist temples throughout Japan, used to summon the monks to prayer and to demarcate periods of time. Rather than containing a clapper, bonshō are struck from the outside using either a handheld mallet or a beam suspended on ropes. At each monastery in Japan on New Year’s Eve, the monks take turns slowly ringing these gigantic bells exactly 108 times and the bells from miles away all ringing at once give the appearance of the bells communicating with each other across great distances and time. Then at exactly one minute before midnight on New Year’s Eve, the monks traditionally slurp Soba noodles noisily and continue slurping into the New Year until 1 minute after midnight in an effort to connect the past year with the future.  And the number 108, ie, the number of times the bells are rung, in some traditions, represents the number of lives lived in the evolution of the Higher Self, our God within.

The New Year period is of special significance in that it offers us the opportunity for deep contemplation of what we are doing with our lives. In particular, the New Year symbolizes a chance for rebirth. It is said that most cells in our body (with the exception of neurons) are capable of regenerating although some cells (such as our red blood cells or the cells that line our digestive track) turn over more rapidly than others. As humans, given this constant cell turnover, who we are today biologically is not who we will be in the future. Given this constant turnover, we, as humans, are given a unique opportunity to decide who we want to be in the future.

In the West, we pride ourselves on the feeling that through will power alone we can change our lives. However, in the East, it is the belief that true behavior modification takes the form of the three R’s, ie, rules, rituals, and routine. And those with more sand at the top of the hourglass have more chance at improvement and more opportunity to evolve into something marvelous compared with those whose sands are running out.

There is a simple formula to life: in life you pay for everything and the later in life you pay, the greater the cost. The longer we wait to make changes, the harder it is at the end. So we need to put the process of change into action NOW. In order to be whoever we want to be we need to take control of our lives. That message is the true blessing of this season of light.  So as we imagine listening to the bells tolling at midnight on New Year’s Eve throughout Japan, the evening gatha comes to mind…

“Let me respectfully remind you

Life and death are of supreme importance

Time swiftly passes by, and opportunity is lost

Each of us should strive to awaken…

Take heed. Do not squander your life.”

Transcribed by Debra B. Kessler from notes taken during the Dharma talk delivered by Abbot Paul on December 16, 2017