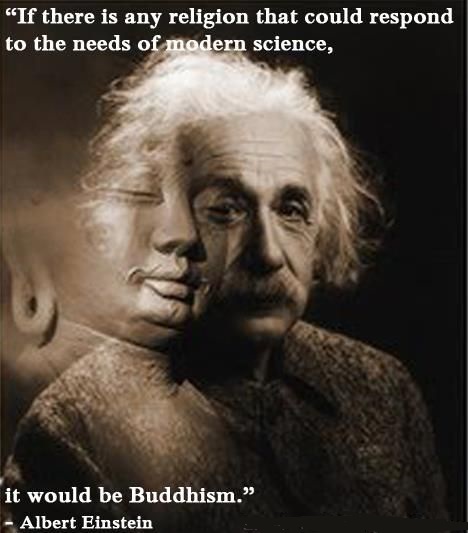 Tesshin Roshi used his talk this to explore how the insight of “uncertainty” from modern physics is similar to a message which Buddhism, and Zen in particular, has been conveying for thousands of years.  The theory, first proposed by Verner Heisenberg states that one cannot ever precisely measure something.  In other words, there are limits to how completely something can be understood.  A related effect to “Uncertainty” is called the “Observer Effect” and it teaches us that the mere fact of observing a thing changes that thing.  For instance, if you try to measure a cup of water with a thermometer, it will impart some heat to the system, thus affecting the temperature reported.  As such, it is impossible to know, in an absolute sense, what the “real” temperature actually is.  Lastly, Roshi mentioned that matter itself really cannot be broken up into particles or waves.  We normally think of light as waves of a certain frequency, but in many cases, it acts as a stream of particles.  Even stranger, our observation seems to control which mode light or matter behaves in.

Roshi then stopped and asked the group if any of this sounds familiar.  Of course, it does!  Zen has always been consistent that mind is one of the aggregates along with the form of our bodies and our sensations.  Our mind shapes our reality and now physics is saying the same thing.  It appears that the physical world is a huge koan!  What is the sound of one hand clapping?  What is the position and momentum of a particle … exactly?  What is your answer?  The more you try to measure and understand it cognitively the more it changes!  How do you respond to this?

Roshi continued by asking the group if they get frustrated during Zazen?  He asked if we sit and constantly wonder how well the session is going?  Do we fear wasting our time because we are not “doing it right!”   Dogen Zenji states that every minute in Zazen is a moment closer to enlightenment.  What does this mean and how does it relate to Uncertainty described above?  Here, Rosi was clear – in Zazen all we are asked to do is observe the mind.  However, we know that the very act of observation changes the subject.  As such, Zazen changes us from the inside out!  This is what Dogen was getting at.  Observation changes reality.  Roshi called this the “shift in perspective” and it takes time for one to realize and appreciate it.

Roshi wrapped up by stating it is not enough to simply sit and observe you own mind.  It must be done in the presence of Sangha.  The group of fellow practitioners help and support your effort and carry you through the rough patches.