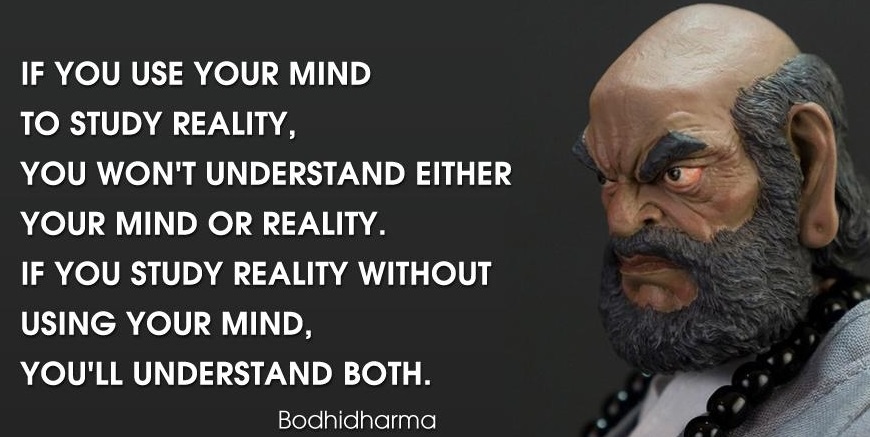 Tesshin continued his discussion this week on the Sandokai or “Harmony of Difference and Sameness” by carefully analyzing the text.   (Full text can be found HERE)

The mind of the great sage of India is intimately transmitted from west to east.

While human faculties are sharp or dull, the way has no northern or southern ancestors.

The spiritual source shines clear in the light; the branching streams flow on in the dark.

The great sage of India is Bodhidharma who lived during the 5th or 6th century and is generally credited with bringing Buddhism, and specifically, Zen/Chan from India to China.  (e.g. West to East)  Bodhidharma was a famous practitioner of seated meditation and is said to have lived in a cave where he faced a wall for nine years not speaking to anyone.

The poem goes on to state that humans may be sharp or dull the way, and that the true nature of reality, does not have northern or southern ancestors.  Tesshin explained that during this time Mahayana Buddhism was dominant in the northern Asia and Theravada was dominant in the southern Asia.  These different schools denigrated each other and both claimed to be “real Buddhism.”  The poem is reminding us that the differences in people’s ability and the religious traditions they belong to really do not matter – the mind of Bodhidharma is everywhere.  Reality pervades everywhere including in the north and south!

Tesshin next pointed out that we live our lives in the “daylight” of the relative world where we clearly see differences and believe we understand everything.  However, the poem reminds us that even when the light does not shine and differences become invisible, the branching streams flow on.  In other words, truth is the same whether we see it or not.

The poem goes on …

Grasping at things is surely delusion;

According with sameness is still not enlightenment

Here is the key message of the text.  Grasping the “this and that” of the relative world creates delusion and suffering.  However, simply saying that everything is part of one seamless absolute whole is also missing the mark.  We cannot stubbornly choose relative OR absolute and expect become enlightened.  Relative life and absolute reality are exactly the same thing.  You can not have one without the other.  The text likened this unity to a tree where the trunk is absolute reality and the branches and leaves are the relative day to day life.  If you remove the trunk, all you have left is a pile of sticks.  If you remove the branches and leaves, all you have is a stump.  A tree is a tree and must have both trunk and branches.  Existence is existence and must have both the absolute and relative perspectives.

All the objects of the senses

Interact and yet do not.

Otherwise, each keeps its place

Sights vary in quality and form

Sounds differ as pleasing or harsh.

Here Tesshin explained that all things in our day-to-day life have their individual identity and interact with each other.  We see people as individuals and each individual interacts with family, co-workers, and friends.  However, we can also look at the universe as an essential whole, indivisible.  In this absolute oneness there can be no interaction because there is no separation.  So, what do we do?  We cannot deny the common sense of the relative world.  However, we also have faith in the wholeness of the universe and our necessary place in it.  This faith gives us strength not to be disturbed by every and any negative event which may occur.

Refined and common speech come together in the dark, clear and murky phrases are distinguished in the light.

Later, the poem again emphasizes the merging of absolute and relative…

In the light there is darkness, but don’t take it as darkness; In the dark there is light, but don’t see it as light.

Light and dark oppose one another like the front and back foot in walking.

Here again, we understand the light to be the relative world where differences are clearly seen and darkness is the absolute world where differences cannot be seen.  After practicing a bit, we may begin to think that there are absolute aspects to our relative life or that somehow relative differences are packed into an absolute sense of reality.  However, the text tells us that this is also not correct.  One is not part of the other – they are the same thing.  Like two feet propelling one body forward.

Next, the Sandokai makes a stern warning…

up standards of your own.

This is a common cautioning in Zen.  Don’t attach to the words in sutras and texts.  The words of the Sandokai point to what we must experience directly.  It is not enough to simply read and intellectually understand.  We must experience and express the Sandokai in our bodies, heart, and bones!  Of course, this is easier said than done!  Tesshin reminded us that this is why we practice.  The mind, body, and spirt must be prepared to absorb the message of the Sandokai.  The poem closes by reminding us that time is short and not to waste our days and nights!