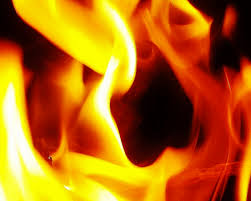 Tesshin opened his talk this week with the Lotus Sutra.  This is one of the foundational teaching of Mahayana Buddhism.   Tesshin admitted that the Lotus Sutra can be quite long and dense and reminded us that the Heart Sutra serves as a good distillation.  However, there are many parables in the longer document which can serve as fine teaching tools.  This week Tesshin focused on the story of the “Burning House.”

In this story there is a wealthy man who owns a large house with many children inside.  All of the kids are in the house totally absorbed with their toys.  At some point a fire breaks out in the house.  The children do not notice the fire, but the parent does and knows he must save his children.  The father needs to figure out what to do right away to accomplish the rescue!

The father’s first idea is to simply go in bodily remove the children.  The problem with this approach is that the fire blocks the way and it would take too long to rescue all the children.  Some kids would still be trapped in the house and would not make it.

His next idea is to yell to the kids that there is a fire and to run for it.  The problem is that the kids do not even look up from what they are doing!  They have heard the father cajole them about “important” things in the past – what a ‘killjoy!’  Can’t he leave us alone for a few minutes to play?

What now?  The father suddenly has an inspired idea – He smiles and tells the children that outside of the house that are even better surprises than their tired and boring old toys.  This piques their interest.  He continues, that there is a carriage led by a goat, another led by a deer, and a third led by an ox.  The kids are totally surprised and their curiosity drives them quickly outside of the house just before the fire completely consumes everything.

When the kids emerge, they immediately see that the three carriages are not present.  Thinking that this was some trick, they start crying and whining to the father.  They accuse him of tricking them to cut off their play time.  The father smiles again and points at a single bejeweled carriage.  The kids eyes go wide and mouths go agape.  Wow!  They asked – why did you not simply tell us about THIS?  The father states, that you have to see it to believe it.  Words could not describe it!

Tesshin then proceeded to explain the symbols in this parable.

The house is samsara or the world of birth and death and the five aggregates of form, sensations, perceptions, mental activity, and consciousness itself.  The house on fire is an allusion to the fact that everything in the phenomenal universe is impermanent – So the house has always and will always be on fire!!

The children represent all of us in the pheromonal world caught up in our desires and delusions.  We are so fixated on our ego that we cannot see reality all around us.  So, what are our toys or delusions?  Tesshin mentioned social media as an example.  How many of us stare at our devices for hours to keep up with ‘friends’ we never speak to in the real world?

We see the father as the spiritual teacher.  It could be the historical Buddha or any accomplished teacher or Bodhisattva.  However, we could also simply consider the Dharma teaching themselves as the father.  We see in the story the father trying different ways to accomplish this difficult of creating awakening.  The story is clear that direct approaches like pointing at the door or laying out the simple facts rarely work.  If they did, we would not need a lifetime of practice.  The dad is figuring out a way to save the kids.  The Buddha historically talked about Upaya, or skillful means.

So, what is the skillful means being pointed to in this story?  Tesshin implied that impetus to the spiritual path cannot be a cold logical argument.  It also cannot be forced through guilt or anger.  In the story, the father piqued the interest of the children with something they could relate to.  I have better toys over here!  This got the children to “look up!”  Once they were ready to look at something new – the real bejeweled carriage became apparent – this, of course, is the realization of true reality – which is the goal of all of us!!

Tesshin wrapped up by asking us to be mindful of the toys which keep us in the burning house.  He asked us to consider those obsessions which our ego cannot let go of.  What keeps you from running out of the burning house?