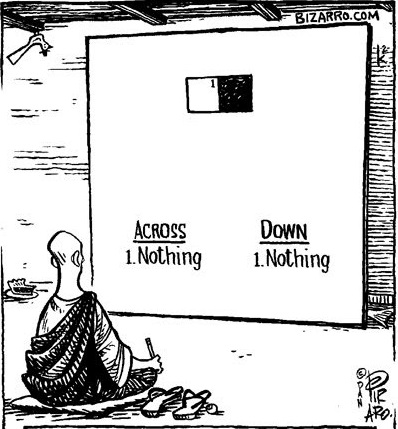 This week Goroshi continued the discussion of Case 51 in the Blue Cliff Record known as Xuefeng’s (jap:Seppo) “What is This?”  Last week, Roshi provided some of the historical background of the koan.  This week we drilled into some of the key messages of this case.  Before he started, however, Roshi reminded the group that discussing a koan in a taisho is very different from actually “doing” the koan.  These discussions serve to provide background and understanding.  Actually, doing the work is “becoming the koan” in the heart, soul, and mind.  We should never confuse this.

Roshi first reminded us about the initial interaction of the Koan.  Two unnamed monks approached Seppo in his hermitage.  Seppo comes out and simply states, “What is this?”  The monks were not really mentally prepared for this profound teaching, and as such, Seppo hung his head and retreated back into his cave.  Later our monks traveled and visited Seppo’s dharma colleague, Ganto.  Ganto asks one of the monks what Seppo asked and the hapless monk replied that Seppo said ‘nothing.’  Ganto replies that it is a shame that he did not give Seppo the ‘last word.’

Tesshin Roshi stopped here to explain to us what is meant by the ‘last word.’  In Zen lore the last word is the ultimate teaching after which no additional teaching is necessary.  So, what is this last word?  It is nothing more than the answer to the question, “What is it?”  Roshi next related how this contemplation of the ‘last word’ pervades Zen culture in Japan.  In medieval times, if a Samurai warrior was captured and had to commit ritual suicide, he was provided with paper and pen to record his last thoughts right before the act.  Many Samurai were followers of Zen and it was thought that the moment of Seppuku provided absolute clarity of life and death.  The warrior stood with one foot in life and one foot in death and clearly saw how these two things were really one.  Roshi then remarked that we do not need to go to this extreme to touch the ‘last word’ however.  We have Zazen and practice which prepares the mind for this experience.

The case continues that at the end of the training period, the unnamed monk asks Ganto what Seppo meant by the question, “What is it?”  Ganto asks the monk why he waited so long to ask such an important question.  The monk replies that he did not want to presume to ask the great master such an important question the moment he first showed up at the temple.  Roshi noted that the message here is not to be shy about the Dharma.  It is said in Buddhism that your current life is precious as it affords you the ability to study the Dharma.  One should not be shy about this.  It is essential that we grab every opportunity.  In many Zen temples you will see the phrase…

“Time swiftly passes and opportunity is lost.  Each of us should strive to awaken.  Take heed.  Do not squander your life!”

Roshi also commented that timing, circumstance, and preparation are very important to achieving realization.  There are many stories of a monk expressing the same answer to a koan which was deemed wrong one week, but correct in another week.  Sometimes it is not the answer itself, but the circumstances in which the answer is given.  All we can do is practice to increase the probability of having the right circumstances.

Tesshin continues to where Ganto mentions that he and Seppo were born in the same lineage, but Seppo will not die in the same lineage as Ganto.  Here the message is that we are all the same “thing” but I am not you and you are not me.  In the absolute sense, we are one, but everyone still lives their individual life with their own karmic “packages.”  Understanding the relative and absolute and understanding that they are exactly the same thing is key foundation to Zen practice.

Roshi wrapped up by asking us if we wanted to know the “last word?”  He said that the last word is not “THAT” “THAT” “THAT”  NO!  The last word is “THIS” “THIS” “THIS”  This moment right here and right now.  Can you understand that?  Can you express it?  This moment holds the mundane and sacred simultaneously.  There is nothing out there it is all right here in THIS.