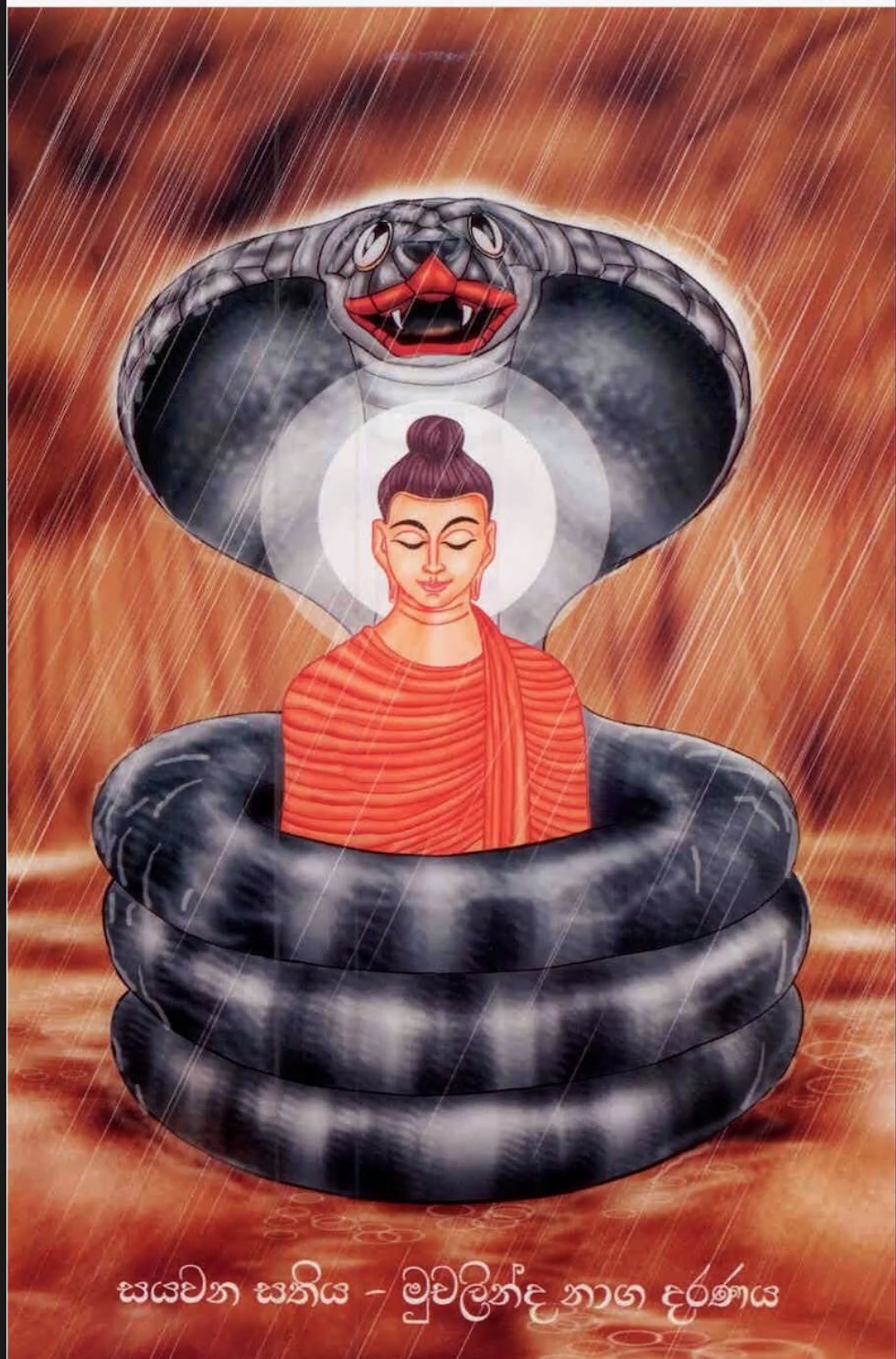 This week tesshin continued our exploration of the Udana Teachings.    These short stories are from the Pali Canon which comprise the earliest Buddhist scriptures.  This week Tesshin shared the story of the Mucilinda Tree.

Thus have I heard. On a certain occasion, subsequent to his attainment of Buddhahood, the Blessed One dwelt at Uruvela, on the banks of the stream Neranjara at the foot of the Mucilinda tree.

At that time, the Blessed One, having sat in an attitude of meditation for seven days, experienced the bliss of Emancipation.

Now it came pass that a great cloud appeared, out of season, and for seven days rain fell, cold winds blew and darkness prevailed. And the Serpent King, Mucilinda, came forth from his hidden realm and winding his coils seven times around the body of the Blessed One, he formed with his serpent’s hood a great canopy above the head of the Buddha, and he uttered these words to himself; “may no coldness touch the Blessed One, nor any heat, may no gadflies or gnats, or winds, or sunheat distress the Blessed One.”

And the Blessed One, at the close of the seventh day arose from that state of trance and Mucilinda, the Serpent King, seeing that the sky was clear and cloudless, loosed his coils from around the body of the Blessed One and concealing his own nature, took upon him the form of a youth and stood before the Blessed One with folded hands, worshipping him. And the Blessed One, in this connection, on that occasion, breathed forth this solemn utterance:

“How sweet the solitude of the peaceful, of him who has heard and perceived the Truth!

Happy to be without malice! restraintful towards all beings!

Happy are the passion-free! Happy he who overcomes Desire!

To have removed the notion ‘I am’, that is the supreme joy!”

Tesshin first pointed out how this “snake story” is very different than the ones we have in the West.  Here the snake is seen as a protector whereas in the West it is a symbol of evil.  Tesshin pointed out that our conceptions of good and evil are just one more dualism and discrimination.  The “snake” is simply a part of reality – nothing more or less.  This is yet another reminder that reality is never simple and cannot be reduced to simple axioms.  (e.g. Snake = Evil)  Our practice disciplines the mind so it quiets down allowing us a chance to really comprehend reality.

Tesshin then continued to point out that in this story the historical Buddha continued to meditate even after reaching enlightenment.  The message here is also very clear.  The work of clarity is never done – even for an enlightened being!  Enlightenment is not a destination, but simply a waypoint of the long journey.  If this was not the case, then the Buddha would have simply stood up and gotten out of the rain.  He did not do this because he deeply realized that the work must continue.  The snake is the hero of this story because it understood the criticality Buddha’s work and was willing protect him by blocking out the rain.

Tesshin wrapped up by reminding us that our work on the cushion is never done.  This is especially true if we happen to get a taste of Kenso.  Early success is dangerous as the ego will attach to it and state – “I HAVE IT NOW!!”  In that very moment all is lost.  This is why whether we see reality or are totally deluded our job is always the same – Zazen!